I was scrolling through Instagram this afternoon and Ambertheactivist’s account came up under ‘Explore’, I follow her Creatingconsentculture account and have great respect for the activism she does around sexual assault and rape culture. Amber is a survivour of sexual violence and uses her experience to create important dialogue and support other survivours. All rad things. However, I was upset to see her post on Ambertheactivist featured below: 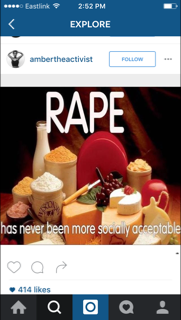 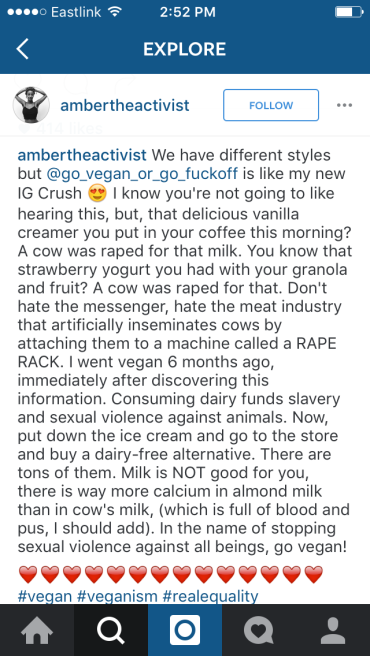 I was so disappointed to see this kind of image and accompanying caption on an activists account that I have such respect for. Not only is it triggering for survivours of sexual assault, but for those who struggle with eating disorders.

Shaming people for their food choice is fucked up in any situation, but comparing the act of consuming cheese, yoghurt, ice cream, and milk to supporting sexual violence is disgusting, misleading and belittles rape and other forms of sexual violence.

Sexualized violence is a huge problem in our society and in recent years, we have finally begun confronting the effects of rape culture. There are many amazing activists and organizations that work tirelessly to make our culture safer for everyone. However, when activists use something as serious and traumatic as rape to further their cause (veganism), they are not only hurting survivors, but making it harder for those who are working towards ending rape culture to be taken seriously by the boarder population.

I have been a vegetarian for most of my life and have dabbled in veganism, but it was directly related to my ED and much too restrictive for me to be able to in recovery. Not everyone, even those who have/had eating disorders have this experience. I have a few friends who are recovered or in recovery and are vegan. They are healthy and happy, and I’m happy for them. I have other friends who were vegetarian or vegan pre-recovery and now happily eat meat. Both of these things are perfectly fine. The only thing that isn’t fine is trying to push a diet or shame anyone’s food choices. Food and body shaming are still big problems in activist communities – as much as they are in other communities. From shaming folks for not buying local or organic, to mocking the foods of a particular culture, to shaming veganism posts – it’s all fucked up.

I have seen a lot of shame-y vegan posts on Instagram and after a pang of guilt, I usually select “See fewer like this” and move on, but this one got to me. I am angry, really angry at this. I am all for animal welfare and ethical farming. I try to buy free range eggs and if a pal asks for suggestions of local meat, I’ll suggest a butcher who I know treats their animals well. I may not eat meat, but I would much rather support a local farmer who cares for their livestock over a factory farm. However, comparing dairy production to rape is SO WRONG. I wish I could put this more eloquently, but I can’t. Not right now. I am so disappointed to see an advocate of consent, feminism and ending sexualized violence post something so insensitive. Women are often compared to animals – cows, pigs, kittens – various kinds of non-human animals. It’s a way of dehumanizing and delegitimizes women and their experiences. Women/femme folks are disproportionately vicitimized through sexualized violence, so to call dairy production “Rape” is beyond ignorant; it is a deplorable, triggering, and false statement. It is ok to disagree with how dairy is produced, it is ok to choose not to eat it. Support vegan business, cook for your pals, do what makes you happy, but there is never a reason to shame another person for their food choice.

The meme is terrible (it was not made by ambertheactivist, just reposted), but it is the caption that really upset me. Amber writes: “…that delicious vanilla creamer you put in your coffee this morning? A cow was raped for that milk.” My stomach dropped and I felt like I might choke when I read that. I had just finished a coffee after running some errands and enjoying the beautiful day. It took me 3 years to put cream in my coffee and not having a breakdown. I don’t always put in my coffee and I still feel guilty, but a little cream in coffee won’t cause my to cry or engage in behaviours anymore. I have the day off and really enjoyed my coffee, and as soon as I saw that post, guilt crashed down on me. I felt sick thinking of the comparison between dairy and a violent crime. I closed instagram and put my phone down. My mind was racing, but then it hit me: why should I let a stranger who posted this (probably without thinking) to control my choices? Through my involvement in  food activism, feminism and recovery advocacy, I have been slowly learning that my body is my own. It doesn’t belong to any man, to my eating disorder, to shame or guilt. I have been blessed with being able to access treatment a few years ago, to be surrounded by loving, supportive, rad people who validate my experiences, I have the educational background to understand  rape culture, feminist theory, food production and environmental issues. I am incredibly privilege to have the tools and support system that I do, but not everyone does. This post triggered me, but I can blog about it. I can rant to a friend about later if I want. Thousands of people will see that post, they may currently be in a violent situation, be a recent victim/survivour of assault, they could have an eating disorder, or a combination. They may not have the tools to deal with triggering and shaming posts like that. I am writing this less-than-stellar blog post to deal with it, I’ll probably call my Mum later, but it will still affect me. If we want to fully support survivours and anyone who is effected by sexualized violence, we have to be conscious is all of our actions and words. We all fuck up sometimes, and I hope the original poster/creator of that meme, Amber and others who repost, can take a step back and rethink their actions. There are many way to positively support animal welfare that do not capitalize on the trauma of those who have experience rape and sexual assault. I do not think this was the creator of the meme or Amber’s intention. I honestly think they are passionate about animal welfare and it was a terrible choice of words and way of writing. We need to be ok with calling-in our fellow activists. We need to acknowledge our mistakes and realize that we can reinforce aspects of rape culture without even realizing it. I hold great respect for animals and their welfare, but comparing dairy production a violent act that is predominately perpetrated against women is harmful to survivours and to our goal of ending sexualized violence.